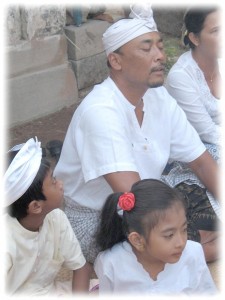 I Madé Suryasa, known as Surya:  Born in Denpasar Bali the eldest son of a Balinese priest (Pemangku) Made was given special religious training which enabled him to understand Kawi, an old Javanese language used in art, literature, and ceremonies, and some sanscrit. He attended graduate school at Bali’s Udayana University and has been co-owner of Danu Enterprises, a Santa Cruz CA.-based company that organizes educational theme-oriented tours. Although specializing in Bali, he has also lead study tours to Indonesia Islands, Greece, Italy, Laos, Vietnam, and Cambodia for 30 years. He has translated and worked with scholars and educational film and video crews, including National Geographic, and resides in Bali half the year. He was senior research assistant for several scholarly books relating to the Balinese view of the After Death. He is on the advisory board for Sacred Sites International, and has been a contributor to Hinduism Today. Surya studied with one of Bali’s most renown healers for 15 years and collaborated on a book about the experience:” A Balinese Self Healing System.”  He has continuously led traditional healing journeys to Bali since 1986, and is said by Lonely Planet On-line Travel to be the “top authority on Balinese Healers.“